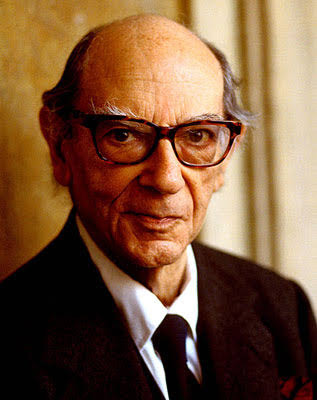 In my latest essay at The Electric Agora, entitled Passionate Thinking [you will find this and more material in my new (May 2016) Google+ Collection, Social and Political Reflections], I deal with the question of social and political values, briefly sketching out my own (changing) attitudes and alluding to the views of Isaiah Berlin.

Interestingly, Berlin started out as an analytic philosopher but was never really at home in that tradition of thought. He tends either to be ignored or scorned by most people I know, and it's entirely possible that he was somewhat overrated during his lifetime.

In a very amusing piece which I link to from my essay, Christopher Hitchens notes that he responded to claims that he was overrated by saying: "And long may it continue."

I think he was more than this, and his characteristic forthrightness was, if not a form of courage then at least the mark of a genuinely passionate thinker.

He was asked about the meaning of life not long before his death. His reply:

"As for the meaning of life, I do not believe that it has any: I do not at all ask what it is, for I suspect it has none, and this is a source of great comfort to me — we make of it what we can, and that is all there is about it. Those who seek for some deep, cosmic, all-embracing, teleologically arguable libretto or god are, believe me, pathetically deluded."

Such forthrightness is refreshing (though I personally don't see where the "comfort" is coming from).

The problem with much discourse in the humanities today is not only that is it not forthright or compelling, but that it is profoundly uncritical and conformist: ideologically driven but not ideologically engaged. Closed off, in other words, to other possibilities.

From my piece at The Electric Agora:

He was a complex man and [...] thinker. [...] Always opposed to fanaticism and revolutionary violence, he was fascinated by certain 19th-century radical thinkers (e.g. Herzen, Sorel). He was also a Zionist of sorts, but he distanced himself both from the secular zealots and their Orthodox counterparts. His vision was clearer than theirs, and his loyalty was ultimately to a broader constituency.

Loyalty is at the heart of things, both in personal and political life. The crucial question is: loyality to whom, or to what?

To certain values, first of all, I would say, values which one typically sees as being embodied in certain individuals or groups. What I have realized is the tenuousness of the link between values (which persist) and the individuals and groups with which these values are – often quite arbitrarily – identified.

I'm not saying that social ideals can exist in the abstract, apart from actual individuals and actual groups. But any such identification should never be more than provisional. There is a world of difference between taking sides in an ideologically open manner, which involves keeping one's critical senses alive, and taking sides in a merely political or social way so that the party or the nation or a particular ideology or ideologue becomes the cause."
Posted by Mark English at 4:59 AM