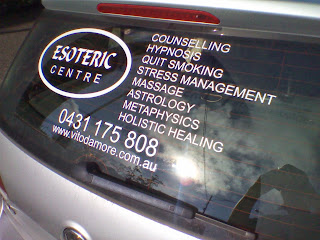 I had to laugh when I saw this advertisement for a kind of New Age one stop shop. You can certainly imagine people paying these folks to get hypnotic help to give up smoking or lose weight, or access other services like counselling or massage or even astrological guidance. But I just couldn't figure out why anyone would want to consult a metaphysician.

In fact, the very word 'philosophy' is becoming problematic. People have all sorts of notions of what philosophy might be, but few of them mesh with how academic philosophers see their discipline. And even academic views of philosophy tend to diverge alarmingly between different schools of thought and traditions and even between individuals.

I recently tweeted [@englmark] the above photo with a comment to the effect that the appropriation of such words by others may indicate that academic philosophy is losing the battle for the very terms which have traditionally defined it. This prompted the philosopher Massimo Pigliucci to come in and suggest that science and the sciences face similar problems. He cited so-called 'creation science' and the use (or misuse) by mystics of quantum physics.

But neither example is a complete appropriation and both merely represent attempts to use the prestige and respectability of science to promote religiously-driven points of view.

Unlike Massimo, I think that confusion over terms like 'metaphysics' and 'philosophy' may be indicative of more general problems facing the discipline, and that academic philosophy has suffered a significant loss of status in recent decades – especially in scientific and secular circles. (An essay of mine published earlier this month at Scientia Salon dealt with some of these issues.)
Posted by Mark English at 10:53 AM No comments: