Most people don't like being told what they should do or how they should think. Moralizing, in particular, gets under people's skin.

In a recent piece at The Electric Agora, Daniel Kaufman makes the very plausible point that overuse of terms like 'should', far from encouraging people to act in a certain way, often only encourages them to 'hunker down' or become defiant.

But his claim about people losing respect for "reasonableness itself" is not so plausible, I think.

"Just as stupid, petty, and unenforceable laws cause the public to lose respect for law generally, and just as – I think – the wild overuse of ‘moral’ and ‘immoral’ and their cognates has eroded respect for morality, the proliferation of weak, groundless, often self-serving “shoulds,” whether of the moral variety or otherwise, may cause people to lose respect for reasonableness itself.”

Would it not rather be the case that respect would be lost for the person – and by extension the category of person – doing the ‘shoulding’?

You could say, I suppose, that it is not reasonableness but the appearance of reasonableness that counts. Calm and cool wins arguments. Even Donald Trump strives to appear reasonable at times.

And if you are giving a good enough impression of reasonableness then you are – for all intents and purposes – being reasonable.
Posted by Mark English at 3:44 AM No comments:

Some people believe that all thoughts and concepts are language-based; others see language as playing a less crucial (or central or primary) role. This issue came up during a discussion of my recent essay at The Electric Agora on Wittgenstein's (mainly non-verbal) antics, though the essay itself was not concerned with this particular question. There are a lot of potential confusions here, a few of which I will try to disentangle as I put my point of view.

How one answers this question depends on how one frames it and what exactly one means by 'thoughts' and 'concepts' (specifically, how broadly or narrowly one defines them). But it also depends on what we mean by language. Are we talking about natural language, that is, human languages as they are in all their complexity? Or are we talking about language in a looser, more general sense?

Wittgenstein, for example, talked about an imagined primitive language that a tribe of builders might use. Clearly he is not concerned directly with actual human languages here (i.e. natural language, as the term is usually understood) but rather with the basis of the meaningfulness of language in general, of any possible language. Whatever he talking about, it is certainly not the complex thing (or set of systems or suite of behaviours) which is normally called natural language and which our brains are specifically primed to acquire. Or, if he is talking about it, it is in very oblique terms: telling a story about an imagined simplified language to demonstrate something about how these actual complex languages came to – or can – have semantic content.

If you wanted to understand how language gets meaning surely you would want to look closely at how children acquire language. Speculations about how language itself developed are something else again. But whatever Wittgenstein is doing, he is not doing science and he is not suggesting an hypothesis about anything.

His general point seems to be that language is a social thing and that meaning arises through social interaction. But who is disputing this? (The main target of Wittgenstein's criticism seems to be certain philosophical ways of thinking, and to some extent his earlier self.)

He is not using the term 'language' in its usual sense to refer to natural language (i.e. to existing human languages). But if – unlike Wittgenstein – you are using the word 'language' in this way, then the idea that all thought and concepts are language-based is very implausible.

"The brain’s language modules (contentious term but I am just using it to mean “brain systems involved directly in linguistic processing”) interact with other modules, and constitute only a part of the total cerebral activity which is associated with conscious experience. It seems a bit forced to characterize the multiple and various conscious experiences not associated with linguistic processing as ‘not-thought’.

"[One commenter] talks about “thoughts of a significant kind” [as being language-based]. This needs further unpacking, but at least the qualification is there."

Having language makes us special, that's for sure.

"... [T]he capacity for complex language changes the nature of ‘thinking’ in radical ways. This relates to the capacity for abstraction. I see a link between natural language and artificial languages (like mathematics). Certain non-linguistic animals can count and maybe subtract in an intuitive kind of way, and may enact certain processes which could be represented in terms of formal logic. But building and using explicit abstract systems can only be done by humans, and I think these formal systems are modelled to a large extent on natural language. Even ordinary natural language involves a high degree of abstraction. It is a big deal and a game-changer.

"I think some philosophers have erred, however, in pushing what I see as an extreme line on the question of language and thought. I am thinking in particular of the views of a couple of my teachers. As an eighteen-year-old undergraduate I was given what I now believe was a false perspective on language and thought in philosophy lectures and tutorials. It took me years to work my way out of it.

"I don’t think I entirely agree with Brendan Larvor’s criticisms of philosophical practice. [Larvor is an academic philosopher working in the U.K. who was cited in my essay and who finds fault with the argumentive practices of philosophers, seeing them as designed primarily to silence opposing voices.] I was not so much bullied as persuaded. But there was a definite sense of cultishness; an unspoken understanding that “We have this special [curiously ineffable] insight which is denied to others.”"

And you'd have to say, I think, that much of this cultishness drew – and continues to draw – on Wittgenstein's later work, including his discussion of imaginary 'languages' and use of the (arguably ill-defined) concepts 'language games' and 'forms of life'.﻿
Posted by Mark English at 2:08 AM No comments: 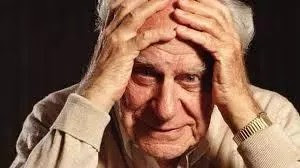 Whether we like it or not – and whether we like to admit it or not – we all too often find ourselves on a communicational battlefield where the performance of bewilderment, contempt and nausea combine with other forms of shaming and ostracism to play a major role in determining who prevails.

My latest piece at The Electric Agora, Wittgenstein's Antics, is about some of the non-verbal methods which people use to promote themselves and their ideas and get their way. The focus is on philosophical head-clutching and similar antics which not just Ludwig Wittgenstein but many other philosophers have been prone to. [That's Karl Popper in the photograph.] The topic is amusing, sure, but serious questions can be asked about the causes, the functions and the consequences of these general patterns of behaviour.

And, by the way, an interesting discussion developed in the latter part of the comment thread on the extent to which thought is necessarily language-based.
Posted by Mark English at 3:39 AM No comments: