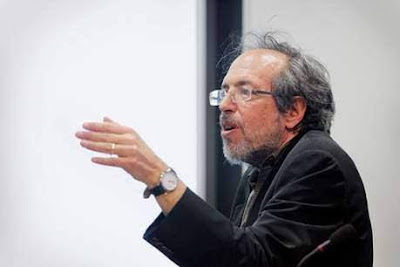 Lee Smolin is a respected physicist who has always had strong philosophical interests and convictions. He recently articulated his realist views in a public lecture. What follows are my notes on his lecture mixed in with a few comments and observations.

Smolin is strongly opposed to postmodernists who reject the notion of objective truth and who see reality as a social or historical construct. He draws parallels between the anti-realism of postmodernists and the anti-realism of certain physicists associated with the development of quantum mechanics (QM) and the so-called Copenhagen interpretation.

Smolin claims (as Einstein did) that QM is an incomplete theory and so, in a real sense, wrong. The key problem with QM as Smolin sees it is the so-called “measurement problem”. It relates to the notion of wave–particle duality and the two laws or rules that QM provides to describe how things change over time. Rule 1 or law 1 says, in effect, that (except during a measurement) the wave evolves smoothly and deterministically (somewhat like a wave on water). This allows the system to simultaneously explore alternative histories which lead to different outcomes all of which are represented by the smooth flow of the wave. Rule 1 applies when you are not making a measurement. Rule 2 applies only when you make a measurement.

Smolin argues that the 2nd rule means that QM is not a realist theory. If we (or other observers) were not around, only rule 1 would apply.

One of the main developers of the theory, Erwin Schrödinger, was uncomfortable with the theory and its implications. He crystallized his doubts in the form of the famous live/dead cat-in-the-box thought experiment (which is explained by Smolin in his talk (starting at 39.54)).

Niels Bohr, in contrast to Schrödinger, embraced the paradoxical nature of QM, partly because it fitted in with ideas which he had developed previously. Bohr’s notion (or philosophy) of complementarity was shaped by these ideas and by the observed behavior of elementary particles. Sometimes such particles seem to behave as if they are waves, sometimes as if they are particles and, crucially, how they are observed to behave depends on the details of how we go about observing them.

Smolin takes an unequivocally negative view of Bohr’s metaphysical views as well as of the views of Bohr’s protégé, Werner Heisenberg. Here he is on the former:

“Now, of course, Bohr had a lot to say about things being complementary and in tension all the time and you always have to have two or more incompatible viewpoints at the same time to understand anything, and that especially goes […] for knowledge and truth and beauty. And he got off on the Kabbalah, of course. Anyway [long pause] … it doesn’t cut it with me.”

For Smolin, QM's incompleteness is intimately bound up with its incompatibility with realism.* QM is not consistent with realism because the properties it uses to describe atoms depend on us to prepare and measure them.

“A complete theory,” insists Smolin, “should describe what is happening in each individual process, independent of our knowledge or beliefs or interventions or interactions with the system.” He is interested in understanding “how nature is in our absence.” After all, we were not around for most of the history of the universe.

Smolin defines realism as the view that nature exists independently of our knowledge and beliefs about it; and that the properties of systems in nature can be characterized and understood independently of our existence and manipulation. Our measuring etc. “should not play a role in what the atoms and elementary particles are doing.” What he means, I think, is that our interventions should not play an essential or crucial role in the descriptions and explanations which our theories provide.

“A theory can be called realist,” Smolin explains, “if it speaks in terms of properties whose values do not require us to interact with the system. We call such properties “beables”.”

By contrast, a theory whose properties depend on us interacting with a system is called operational. Such properties are called “observables”.

Even ordinary observations (like seeing or hearing or recording something electronically) involve us or our measuring devices interacting in some way with the system we/they are observing/recording. Smolin appears not to be concerned with such interactions here because, although the nature of the observer’s perceptual apparatus and/or the nature and settings of the equipment being employed determine or pick out what is and what is not being observed or recorded, the results are otherwise quite independent. The type of datum is determined by the nature of the observer or the observing or recording process, but not the data themselves.

In the case of experiments with elementary particles, however, the situation is subtly – and sometimes dramatically – different. Interactions are such that they determine, or play an active role in determining, the values in question.

Arguably, ordinary cases of measurement and observation do not pose problems for the commonsense realist. But if our observations alter in a material way whatever it is which is being observed – as appears to be the case in respect of the quantum realm – problems arise.

Operationalism was first defined by the physicist Percy Bridgman (1882–1961). The book in which he elaborated his views, The Logic of Modern Physics, was published in 1927, the same year QM was put into definitive form. Bridgman’s philosophical approach has much in common with the instrumentalism which characterized the views of the majority of thinkers (physicists, logicians, philosophers) associated with logical positivism. Bridgman was in fact personally involved in the activities of the Vienna Circle.

It was the physicist John Bell who introduced the concept of beables. According to Bell – and according to Smolin – it should be possible to say what is rather than merely what is observed. This is all very well but – quite apart from philosophical arguments questioning the notion of a noumenal world – experimental results continue to come out against the realists. Experiments with entangled particles, for example, seem to exclude the possibility of any form of local realism. Some form of nonlocal realism is still very possible however.

Smolin is at his weakest when he talks history. The story he tells about the generation of physicists who grew up during the Great War is hard to swallow. It seems that they were predisposed to anti-realism by virtue of the unusual circumstances of their early lives. They had witnessed at an impressionable age the destruction of the social optimism of the 19th century, and so were skeptical of rationality and optimism and progress. They had lost older brothers and cousins and fathers and uncles and had “nobody above them ...” No wonder they didn’t believe that elementary particles etc. have properties which are independent of our interactions with them!

You would think that the fact that Niels Bohr, the father of the Copenhagen interpretation, was not a part of this generation would sink Smolin’s generational explanation from the outset. As would even a cursory knowledge of the history of 19th century thought which is shot through with various forms of idealism, anti-realism and radical empiricism. The phenomenalist philosophy of science of Ernst Mach (1838–1916) is a case in point. At the end of the 19th century, Mach articulated ideas which were later picked up by the thinkers Smolin is criticizing.

Smolin explicitly recognizes that Bohr’s main ideas were formed well before the development of quantum mechanics and that he was influenced by 19th century thinkers – including by Kierkegaard (whom Smolin clearly does not hold in high esteem).

Smolin quotes some of Bohr’s claims:

“Nothing exists until it is measured.”

“When we measure something we are forcing an undetermined, undefined world to assume an experimental value. We are not measuring the world, we are creating it.”

“Everything we call real is made of things that cannot be regarded as real.”

“The atoms or elementary particles themselves are not real: they form a world of potentialities or possibilities rather than one of things or facts.”

“What we observe is not nature itself but nature exposed to our method of questioning.”

Bohr said: “We must be clear that when it comes to atoms, language can be used only as in poetry. The poet […] is not nearly so concerned [with] describing facts as [with] creating images and establishing mental connections.” What he meant, presumably, is that the normal referential function of natural language cannot be used in relation to the quantum world, and anything we say about that world (using natural language) will necessarily be a creative construct shot through with metaphor and paradox.

Maybe so. Or maybe not. It is not something we can know a priori. It all depends on how our models develop and on the results of experiments. But, until QM is subsumed into some (hypothetical) broader theory which allows us to envisage quantum processes in more intuitive or realism-friendly ways, Bohr's general views regarding the radical inapplicability of natural language and ordinary logic to quantum events or processes will remain plausible.

* There is also the question of gravity. Quantum field theory brings together QM and special relativity. QM and general relativity have yet to be satisfactorily reconciled, though a line of research associated with the so-called AdS/CFT correspondence – a string theory-based approach – has made considerable progress towards this goal.

This is a revised version of an essay published at The Electric Agora on June 4.
Posted by Mark English at 4:41 AM No comments: